Inside The Group Of 1 Million Moms Fighting For Workplace Equality

Earlier this week, 18 students from high schools in Seattle and Redmond, Washington, visited the state’s capital to testify about and support HB 1646, the Equal Pay Opportunity Act and voice their concerns about gender-based pay inequality.

“My friends and I should be able to make the most out of our futures and have the same opportunities as everyone else. Fairness and equality are bedrock values that we’ve been taught. And we’re shocked that all these years after our great grandmothers helped win the right to vote—and our grandmothers and mothers fought for equal rights, we’re still so far off,” said Olivia Roskill, a sophomore from Redmond, Washington, in her testimony before legislators.

The group was accompanied by Kristin Rowe-Finkbeiner, the cofounder and executive director of MomsRising, a Kirkland, Washington-based advocacy group that focuses on issues pertaining to parents and families such as paid leave, equal pay, health care access, and others. Rowe-Finkbeiner, a mother of a 15- and 18-year-old, had spoken to the gender equality club at one school and worked with one of her son’s classmates at another. She has been educating both groups, speaking at one school and answering an inquiry from another, about the importance of gender equality. The pay gap resonated with them and they wanted to take action, she says.

“The interesting thing to me is they’re thinking of their pay issue as a human rights issue,” she says.

MomsRising is now a national movement with more than a million members and a virtual staff of 30, and it’s growing fast—the group added more than 70,000 members in the last three months. But the group had humble beginnings, it started around a kitchen table over eight years ago. After coauthoring The Motherhood Manifesto: What America’s Moms Want And What To Do About It with Joan Blades in 2006, Rowe-Finkbeiner says it was clear that they had to take some kind of action to deliver on the book’s premise. At the time, she says issues related to family economic security like paid leave, access to affordable child care, increasing the minimum wage, and access to healthcare and tax credits for families weren’t on the radar of many national politicians. But she’s finally starting to see a shift. 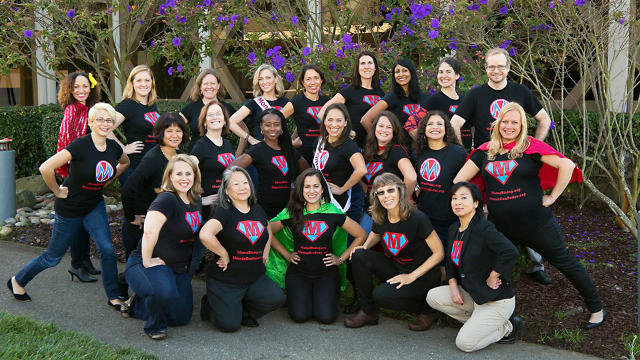 Rowe-Finkbeiner attributes some of the shift the the change in women’s roles in their families. Forty percent of mothers are either the sole or primary breadwinners. More than 57% of all women and three-quarters of all single mothers are in the workforce. Yet policies haven’t kept up with working mothers or family needs, she says. But as mothers gain more clout, politicians starting to notice and address their concerns.

Making An Impact On and Offline

Through the years the growing group of moms have found various ways to garner attention for their issues. Rowe-Finkbeiner says her network has more than 3,000 bloggers have a combined blogging and social media reach of more than 3.5 million. But they often take their advocacy work offline. For example, when pushing for affordable, high-quality early learning opportunities, MomsRising teamed up with the National Women’s Law Center and staged a life-size version of Chutes and Ladders on the lawn of the U.S. Capitol. Legislators including Senators Tom Harkin (Iowa) and Kirsten Gillibrand (New York) played the game on a 40-foot board with mothers and children to widespread media attention.

Publicity stunts aside, MomsRising is having a serious impact. It’s able to mobilize more than a million members through its networks. Later this year, the organization will roll out state-focused groups that can be tapped for lobbying efforts like letter-writing, publishing op-eds, and meeting with legislators at the state and local levels.

Members have testified before legislative bodies ranging from town councils to Congress. They’ve been involved in successful campaigns ranging from the passage of paid sick day requirements in New York City to Medicaid expansion in various states to national efforts like the Child Nutrition Authorization Act (2010) and Patient Protection and Affordable Care Act passage.

In recognition for its work fighting for passage of two executive orders making contractor pay practices more transparent and prohibiting federal contractors from retaliating against employees who discuss their pay, MomsRising was invited to stand with President Barack Obama when he signed the orders in April 2014.

The Future For Working Families

MomsRising’s key issues remain affordable child care, paid sick days, health care access, healthy food availability, and paid maternity and paternity leave. The organization is also advocating for policing policy reforms that end racial profiling and police brutality. And while these seem like far-reaching policies, Rowe-Finkbeiner says that all of them may be the experience of any one of her members. Her members’ experiences and challenges fuels the fire in her belly.

And now that fire is spreading to the next generation. After the Olympia statehouse visit, Rowe-Finkbeiner got a call to start prepping testimony to possibly present to the appropriations committee, which is the next stop on its journey to becoming a law.

“I am so hopeful about the future of our country. Women have been fighting for these policies for a very, very long time—way before I was born—and so the fight is probably going to continue after we who are here now are gone. So, it’s really inspiring to see young people stepping into leadership,” she says.

Correction: A previous version of this article misstated that the group of teens visited the nation’s capital. They visited Washington State Capital.